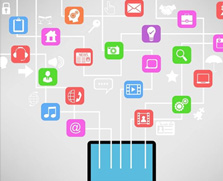 Nvidia is a global technology corporation based in Santa Clara, California, which
specializes in manufacturing the products for GPUs (Graphical Processing Units) for PCs and
notebooks, also the founder of world’s first Graphical Processing Unit, through it’s product
launch GeForce 256. Popular science, the world’s largest science and
technology magazine has rated Nvidia ION which is a graphical processor that boosts the
performance of the PC graphics by 10X over integrated graphics. Thus Popular science
magazine has rated Nvidia as one of the most technology innovations that made it to the Top 100
innovations in the December issue of 2009. Due to the specialization of it’s graphics processing
manufacturing units and many successful product launches it has even entered the gaming
platform to develop graphics and hardware acceleration for Microsoft’s Xbox game console in
2000. In 2004, they also progressed towards a major move by making an announcement to
prototype and design the build of the graphics processors for Sony Playstation 3 which resulted
as a successful product that helped Nvidia to be official GPU manufacturer for Sony and Toshiba
which led to fallout of their contract agreement with Microsoft Xbox due to its business strategy
in the market as Xbox and Playstation were facing competitive rivalry.

I/O Based Model of Above-Average returns.
Though Nvidia can’t directly compete with Intel in making the core chips for PCs and
notebooks, Nvidia always is a global leader in GPUs design, manufacturing and production of
GPUs. But always responded to various challenges and demands of the market by meeting the
demands and exploration of opportunities with a complete set of dynamic market variables to
demonstrate the competitive advantage. Nvidia’s average returns with it’s Tegra 2 in the first 3
quarters of 2011 were stagnated and were forecasted to remain in the fourth quarter flat as well.
In the recent times it has entered the mobile computing market space by launching it’s new
product Tegra 3 Quad-core chip which is a low-powered efficient chip that can directly compete
with Arm processors such as Snapdragon, Cortex, ARM9, ARM11, Samsung Humming bird,
Apple A4, Apple A5 chips in the market for powering Tablets, smartphones and Infotainment
systems. As of today Tegra 3 Quad-core chip for Tablet is the world’s first Quad-core mobile
processor released on November 9 th , 2011, which has easily dominated it’s market biggest threat
Apple A5 chip and also demonstrating this chip at Mobile World Congress to be held in
Barcelona, Spain from February 27 th , 2012 through 1 st March 2012. Thus strategically
controlling the segment of PCs, Notebooks in GPUs and segments of Quad core chips in
Smartphones and Tablets, the shares of Nvidia rose by 3.5% on November 11 th , 2011 after the
announcement of Tegra 3 Quad core chip trading to $14.98 on Dow Jones Industrial average
index thus drawing several stake holders who expects above-average returns from Nvidia.

Nvidia has a close watch on the external environment that can change the composition and
launch of it’s designs and innovations. There has always been threat of new entrants into the
market, in 2000 ATI technologies launched its response to Nvidia GEForce 256 by launching
R100 a fully DirectX 7 compliant GPU. Though in the initial stages Nvidia was the market
leader in GPUs and captured the gaming platform by signing up the contract with Microsoft
Xbox gaming console, eventually manufacturing the graphics processors for Sony Playstation 3
has led Microsoft to sign up it’s new contract with ATI technologies to keep it’s competitive
advantage in the market which impacted the stakeholders of Nvidia, ATI continued to evolve as
new and powerful suppliers of the market till they were acquired by AMD (Advanced Micro
Devices) in 2006. This acquisition marked the importance of fusion generation of computer
processors for AMD and went completely with the logo of AMD by removing the ATI
terminology/logo from 2010. More product substitutes grew in the market by Apple and
Samsung with their Cortex and A4, A5 chips which impacted Nvidia market share. This led to
more technological exploration of opportunities within Nvidia to advance their product
innovations and apply the knowledge of their Tegra 2 Dual Core to Tegra 3 Quad Core

4Case Study I Strategic Focus Page
evolution, thus captured the market by releasing the world’s first mobile quad-core processor.
Due to this new launch, Nvidia is predicting the growth of $4.7 bn to $5 bn in 2013 to exceed the
expectations of $4.45 bn. Clearly Nvidia has dominated the market in 2010 with a market share
of 31.5% as opposed to it’s direct rival AMD with a market share of 24%.

Applying strategic competitiveness in my current organization
Capgemini a global leader in consulting, technology, outsourcing and local professional services
is headquartered in Paris, France and operates in more than 40 countries. With over 115,000
people in North and South America, Europe and the Asia Pacific regions, with major income
derived from North America. Capgemini strengths mainly are resources, capabilities and core
competencies. Capgemini closely monitors and scans its competitors such as IBM, Deloitte
Consulting, Accenture to be a game changer in the niche market. After acquisition of Earnest and
Young and Kanbay International in 2000 and 2006, it started expanding their operations of
outsourcing and consulting in Information Technology, Financials and BPO.
Capgemini has a specific outsourcing model called Rightshore by launching outsourcing centers
for software development and IT services across the globe, people are critical resources for
Capgemini in terms of providing leading edge software solutions and product innovations and
strategic business transformation plans to various industrial clients in the segments of Aerospace,
Defence, Oil, Utilities, Energy, Power, Retail, Automotive, AFS, Media. Capgemini has costly-
to-imitate product innovations in terms of providing solutions for Enterprise Resource Planning
software solutions such as SAP software and it’s pricing structure in terms of building the rate
cards for client IT services has allowed Capgemini to win several IT projects in competition to
it’s rivals IBM, Deloitte, Accenture.